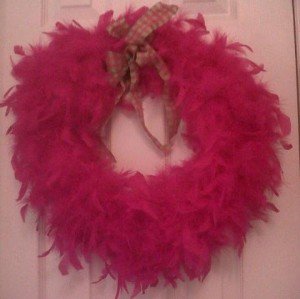 Turn a feather boa into a cute wreath for next to nothing.

I had a bright fuschia boa I had gotten as a party favor and couldn’t bear to throw it away (although what was I going to do with it?). I thought of all the feather wreaths I had seen and decided to give the boa a shot.

This was so easy!  I took a wire coat hanger and stretched it into some semblance of a circle, leaving the hook intact.  Then I found the loop at one end of the boa (buried within the feathers, but one is there, trust me) and placed it over the hook of the hanger.  I wrapped the boa around the circumference of the hanger again and again until it reached the other side of the hook. Then I slipped the remaining end loop over the hook, and bent the hook down and out of sight on the back of the wreath.  After attaching a ribbon onto the wreath with a bread twist tie, I hung it on my daughter’s door with – what else? – a removable hook.

You’ll need a feather boa around 6 feet long, a standard length, which can be purchased in almost any color for $4 to $9 if you don’t already have one at the bottom of a dress-up box somewhere.  What is great about this wreath is that it requires next to nothing to create and the boa can always be removed for a later play date with no damage.

This version admittedly isn’t as sturdy as those that are professionally created, but it will hold up fine for display.  The fluffy feathers are very forgiving and don’t require exact placement to look great.