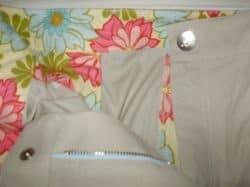 Women may mourn the loss of our girlish figures that become harder to keep after childbirth, but at least we have the excuses of pregnancies and hormones. For years I’ve also heard moms lament another phenomenon. While we’re gaining in the rear end, the guys seem to be losing in theirs.

When I read about Bonobos, which manufactures pants tailored specifically to combat the “saggy diaper bottom” look of men’s pants, it was a revelation. Isn’t it true that some guys walk around with a saggy diaper look to rival any toddler’s? What if men weren’t actually losing their rear ends with age (in their defense, my husband would tell you this is due to them working their rear ends off at the office and then getting them chewed off at home).

What if all this was really just poor tailoring? What if guys could have their back seats restored, sort of the way the Wonderbra was introduced for women to make the most of what was already there all along?

This concept seemed significant, especially in the south where khaki pants are the de facto men’s uniform. Whether it’s in a casual office, at a ballgame, in church, or the golf course, there are men with saggy diaper bottoms all around, with nothing but wallet impressions to give them shape (and that’s only for one pocket, mind you).

Bonobos’ description of how they tailored their pants makes perfect sense. Apparently most mens’ pants are cut straight through the seat and waist, but these pants are cut with the waistband curved so they won’t ride too high or too low. They also have a fitted seat, which eliminates bunching.

So I ordered a pair of these pants – in khaki, of course – as a simple experiment. I never said a word to the hubs about their special tailoring. The company boasted free shipping both ways and excellent customer service, and although they weren’t cheap, they were guaranteed and promised to last for years.

It’s not like underwear, where the pattern is a private matter. The lining on these pants actually peeks through the back pockets ever so slightly, although I’ve since learned you can specify that you don’t want the liner to show (apparently the liner is a bit of a status symbol among fans). But this could never happen in his world; the lunch barbeque buddies would never let him live it down. A floral lining would rank one step away from lace.

In short, there was no fit, no matter how flattering, that was going to make these pants manly enough for my man. I returned them with no problem, completely pleased with the company’s service and regretful that we hadn’t made a match. I hear these pants are building a following of loyal customers, and I hope they continue so that they can expand the line to appeal the typical risk-averse, stick-with-the-classics kind of guy.

It’s worth noting that the founders are not married, so maybe they can take more fashion risks (in fact, they encourage their “future wives” to make liberal use of their contact form). On the other hand, they’ve already created a simple wardrobe of fabrics other than khaki. They have Monday Blues, Tuesday Olives, Wednesday Tans and Thursday Browns. Your five year old can’t dress himself any more easily than that!

Maybe Bonobo’s pants will become so mainstream that all our men will begin sporting fitted, flattering khakis. In the meantime, the company has introduced a line of seersucker pants. Maybe some of our southern gentlemen will take a chance on those.