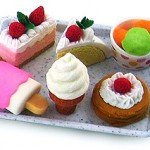 Last summer kids went wild for animal bracelets (also known as Silly Bandz), the multi-colored, shaped plastic bracelets that cuffed their wrists. Although we moms are still pulling them from the vacuum and clothes dryer, the fad has come to a close as the Next Thing has arrived. According to George (a.k.a. Birmingham’s Mr. Magorium) of Snoozy’s in Crestline, when kids aren’t bringing in their allowance money to buy something, “we know it’s over.” That sounds like the perfect metric for a trend, since I often test the resolve of my kids’ purchasing intentions by having them use their own money.

Now the trend for five to eight year olds is collectible erasers. Being accustomed to the classic Pink Pearl eraser, you may wonder what could possibly make an eraser collectible. Essentially, think of these as little toys that happen to be made of eraser material, since it’s unlikely your kids will ever actually erase with them. For the record, they do actually erase, so maybe once the kids tire of them they can rub them away usefully.

The erasers come in themes like ice cream or sushi and can be assembled and disassembled (note: not for young children who might swallow them).

At Snoozy’s a set of 30 erasers is around $15; online, expect to pay around $1 for each individual eraser. Online sources include Amazon or Itasho. Be warned that there are over 300 different eraser designs are available, so it’s wise to start out with a focus – say, picnic foods – and a limit.