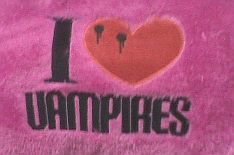 Now that the Team Edward vs. Team Jacob furor has died down somewhat, I have a confession to make: I don’t get it.

Millions of  girls and their mothers have been enthralled by Stephanie Meyer’s Twilight book series. It’s been the female cultural phenomenon of the past five years, and I gave it a shot with the first book but gave up  on it just short of the baseball game. (Granted, the kids were younger then and there was little time to read.) Watching the movies has left me even more stymied.

Apparently I’ve just grown too cynical to enjoy this fantasy. I can’t imagine what Bella’s thinking.

Despite my doubts, I won’t give up on the genre. There’s too much True Blood to avoid it now.