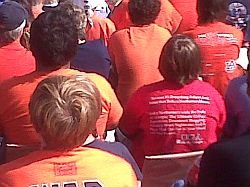 When you’re the home team, you expect to see your opponent’s colors in one small section and scattered throughout the stands. You welcome these visitors (mostly) knowing that they, like you, are here to support their team and see a good game.

Yet, there are always folks in the stands who, while not overtly rooting for your opponent, aren’t cheering for your team either. Instead, their allegiance is with one of your biggest rivals, and they cannot bear to support your team, even for this one game.

Take a look at this guy.  He is wearing a Georgia Bulldog T-shirt in the middle of the Auburn end zone (for those who don’t know, Georgia is Auburn’s second fiercest rival after Alabama and one of the oldest continuous rivalires in the history of the game).  I wonder, is this a case of oppositional defiant disorder? He surely is aware of this serious breach of sports etiquette.

Then, there are the quiet pseudo- fans, the ones who sit and stand with the crowd but signal their true loyalties with subtle clues like wearing your rival’s colors. You can make a game of spotting these “help me, I’m not really part of this tribe” people at any game. For example, the girl who wears a seasonally appropriate paprika shade to an October Alabama game (who can object?), or the guy who sports a white and burgundy striped button down and sits zombie-like through a thrilling game at Auburn. It’s their way of showing that their heart beats blue or their blood runs crimson or whatever gory metaphor applies.

There are several explanations for these home game hostages:

Whatever the explanation, there is only one possible way to treat these rival-hearted visitors: Make them realize that since they can’t join you, they’ll just have to beat you. See you across the gridiron next time, sucker.