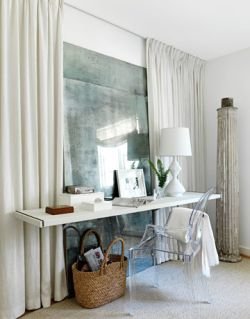 For the second month in a row, a Birmingham designer has been featured in House Beautiful magazine, and my hat’s off to her. Lindsey Bond is an up-and-coming designer who is not a BirminghamMom but here’s her fait accompli: She redid her fiance’s house before moving in/getting hitched. Check out the clean, fresh aesthetic she brought to fiance Richard’s home.

Lindsey, take it from a BirminghamMom: you have thus saved yourself years of clandestine but steady new bride efforts such as replacing stadium cups with real glasses, subtly retiring a dozen nostalgic tattered college t-shirts (despite objections that they are perfectly good for yard work), and campaigning until you can finally heave-ho the giant velour recliner (btw, you made Richard’s brown desk look appropriately dignified).

Lindsey conveys the desperateness of her initial situation with these quotes: “The only decorating he had done was a crimson red bathroom. You know, Alabama football red. I was like, ‘no, no, no.‘”

Oh yes, sister, we have all been there. And Lindsey, I must warn you that if this cute 50′s house had a basement, you would have been in serious danger of seeing all that bachelor stuff resurrected in a man-cave. I believe you sensed this when you admitted your strategy of a total overhaul. “I know, I kind of took over everything. But I mean, Richard had Alabama football posters everywhere! They had to go, right?”

Right! There’s just no getting around it. Most guys do not realize that a sports team theme is not a design plan. You have delivered your man to a higher standard of beautiful living, and well before your April nuptials.

If Richard’s friends read House Beautiful, they would probably tease him for being the most whipped bachelor in Birmingham. But when they see this house, they’ll just know he’s the most stylish instead. Best wishes to you both!