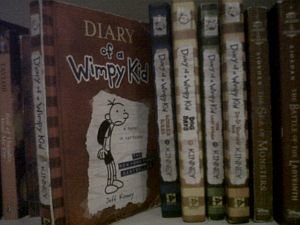 You wouldn’t think a wimpy kid would have a diary worth reading, but it turns out that kids all over the country have been enthralled by the Wimpy Kid’s Diary series.

The books began online (visit here if you haven’t already read these fun books) and first book, Diary of a Wimpy Kid, journals the trials and annoyances to which every kid (even former kids, like us) can relate. Stick figure illustrations show Wimpy Kid Greg’s everyday misadventures along with his brother, Roderick.

One of the books in the series is even a do-it-yourself diary, with thoughtful and humorous prompts to draw cartoons and make lists in the style of the books. Consider this the ultimate activity book for your kids and a priceless memento of these years once they’ve grown.

Birmingham kids and parents will have their chance to meet Jeff Kinney, the grown-up and father who gave voice to the characters of Wimpy Kid.

Kinney will be at the BJCC Concert Hall on Saturday, November 13th at 11 a.m. for the release of his 5th book, The Ugly Truth, and a book signing after his presentation (Gift alert for Birmingham Moms needing niece and nephew gifts – if you’re there with your kids, why not handle some other gifts too?).

Tickets to the event are free and available at Books-A-Million at Brookwood Village until the event date.  Adults can get up to four tickets per person. Kids under 2 won’t need a ticket for the event.

Alabama has a tie to the Diary of a Wimpy Kid movie: Fregley is played by Clanton’s own Grayson Russell, who was also Texas Ranger Bobby in Talledega Nights.