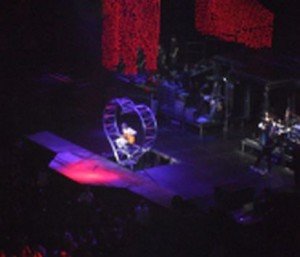 At the Justin Bieber performance in Birmingham, I found the concert experience is totally different when you’re a mom instead of a mere fan.

There were two types of concert goers: 1) Young girls and 2) their drivers.  Most of us drivers/chaperones were moms, but there were several dads there scoring parent points with their daughters. They seemed to be relying heavily on frothy beverages.

Apparently these concerts are a fashion show for the girls AND the moms. Among the girls, fat boots were the accessory of choice. Among moms, it was big purses that could hold all of our stuff and theirs.

The squeals were deafening. A mom near me confessed she learned to bring ear plugs after surviving the Jonas Bros. concert.

One lucky girl was called up on stage to be serenaded during “One Less Lonely Girl.” Of course, this is the oldest concert trick in the book, but it’s new to this audience. All I could think of was what The Boss did for our famous Birmingham friend, Courtney Cox. To this girl’s credit, she did not swoon and fall right off that little stool.

At one point, Bieber wiped his face with a towel (the old Elvis routine) and threw it into the audience. My binoculars followed the towel down to where a big ol’ Mama bear grabbed that thing and slung off all the tiny girls who were grabbing for it, one of whom had her arms locked around the mom’s neck! An SEC lineman couldn’t have guarded that towel as fiercely.  For shame, it was never a fair fight.

I still remember the heartthrob concerts I saw, but my swoons have been replaced by mom-thoughts. Does anybody else have these?

You know you’ve moved to a new phase in life when the most adorable part of the concert by far is the video montage of Bieber as a toddler singing his ABC’s. Aww, no wonder we moms get Bieber fever.