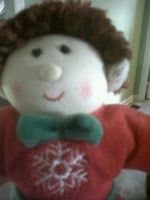 Sandy brought up the question, “Why? Why did the elves come into our lives?”, and I have debated this theory with several moms. Based on their input, I submit the following usubstantiated but entirely plausible theory:

Once upon a time, (probably during the ’90′s), there was a really bored yet competitive mom who didn’t have enough to do during the holidays, what with shopping, baking, cleaning, finding coordinating outfits for the kids and all.

Now, this was an exceptional mom. Her family’s snapshots had no red, shut or crying eyes. Her kids bounded into Mall Santa’s open arms without fidgeting or trepidation. Her cards always posted the day after Christmas and her scratch gingerbread house never caved.

“It’s a shame that it gets dark so early during the winter,” thought this mom as she iced her 100th cookie for the swap she hosted each year. “I’ve already filled every daylight hour with class parties, church pageants, and errands. If elves can manufacture toys 24/7 in the dark of the North Pole, why can’t I summon them down here to manufacture some mischief overnight?” (Mischief was a good choice because her own kids did not provide enough chaos if left to themselves.)

After much thought and many pleas to the North Pole (PTO fundraisers don’t take no for an answer), she discovered a family of magic elves who could keep up with her own boundless energy and imagination. Not only that, these elves could manufacture mischief – mystery messes! toothpaste pranks! milk mishaps! – and this kept the mom happily occupied imagining what her elves could ever do to top their last brilliant prank.

The elves were a hit as soon as they arrived in her immaculate home. Her kids loved their elves so much, they went to school and told all their friends about them. The other moms now clamored for elves for their own families. Who could be content with visions of sugarplums dancing in one’s head when there was elf magic to be had?

So the industrious mom decided every family should have some elves. Somehow she got a book deal, a distributor, and (most important), a really great import connection from China. The rest, as they say, is history. Thanks to this mom acting as the elves’ agent, they became the hottest addition to the holiday lineup since Rudolph and the Grinch.

And now, boys and girls, you know how one mom thinks elves came to join our families and extend Christmas magic to excited children and even the overwhelmed, exhausted mothers out there. She has finally come to acceptance and forgiveness for the original elf mom, who in all likelihood continues to decorate hundreds of holiday cookies to this day.