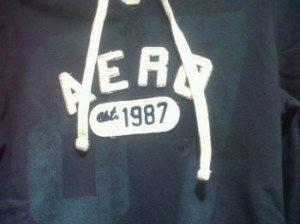 I finally put my finger on what it is about the clothes from tween retail store Aeropostale that makes me so uncomfortable.

My issue is the year emblazoned across almost every article of clothing: 1987, when the brand was founded.

Let’s just say that I was around in 1987. And seeing this year in its appliqued glory across t-shirts and hoodies everywhere I look, including on my own kids, is starting to annoy me.

Most any kids wearing this brand weren’t even, as the saying goes, a gleam in their daddy’s eyes in 1987. To their minds, the year is practically on the BC side of the time line.

In fact, today’s brand-conscious kids have nothing on 1987, when even hair spray – and 80′s hair required plenty – had to be a certain brand. The girls were wearing Jordache, Gloria Vanderbilt, and Levis, which was one of the first brands proud enough to boast about the year it was founded on it’s iconic tag. Instead of Aeropostale/New York/1987, it was Levis/San Francisco/1853.

Now, that is the way to do it. A date from the 1800′s is way too obscure to make a mom with the checkbook – make that debit card nowadays – feel the tiniest bit quaint or outdated. Announcing your product was invented along with the Gold Rush is legitimate. Announcing your product was invented along with Madonna is not. We’re just not ready to classify the 80′s as dusty history, even if Livin’ on a Prayer (even if it’s new to this  Rock Band crowd) is technically an “oldie.”

Take note, Children’s Place (est. 1989) and P.S. (est. 1990), who also like to plaster a year on their signature clothing. You just might push us self-conscious moms toward the retail stores of Abercrombie & Fitch, where we can endure the coal-mine dark lighting, the near-naked models on the shopping bags, and the overwhelming scent of cologne for the sake of the kids’ wardrobe requests. A & F was established in 1892, and since that was before I was even a gleam in my great grand-daddy’s eye, I can deal with it.