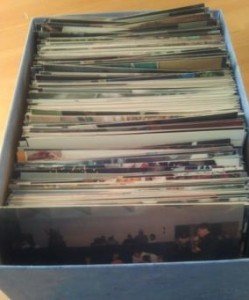 and then there are the digital pics to sort…

This Saturday, May 21st, has been designated by self-appointed end-times specialist Harold Camping as the date the world will end. So convicted is this guy that he has marshaled all his resources to warn others of the coming end.

Although I’m not concerned that Saturday is the last day of earth as we know it, the prediction has been an excuse to reconsider my frustrated threats to do so-and-so “if it’s the last thing I do.” A quick assessment shows that I am woefully behind, especially on family scrapbooks and photos.

On one hand, if time ends, then a scrapbook certainly won’t matter. On the other hand, if we keep rocking along as usual, when on earth – pun intended – will our memories get chronicled?

At this point I would settle for having all my photos consolidated onto one media device.

Now I’m not even sure which baby is which in the swaddled pictures. The background clues are exhausting, especially for prints without a date (did we have that rug when he was born? The trees outside the window looks bare, that must be her since it’s wintertime.) I know people who can whip out their vacation picture books almost as soon as they pull back into their driveways. Not us; apparently we like to let photo memories ripen with age and neglect, then make a game of figuring out what we could have been doing at the time.

Hopefully this Camping fellow has made a major miscalculation and we will wake up on May 22nd with renewed belief that there is all the time in the world to finish the scrapbooks.