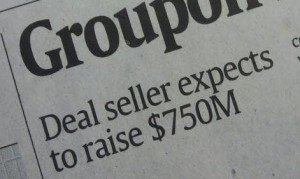 I had dinner with a friend who was insistent that she treat from among a fist full of promotional one-day deals she had purchased. She announced that she had put herself on a moratorium from buying more deals because she didn’t know when she would get to use up the certificates she’d already purchased.

Surely you are familiar with the daily deals that are based on a group purchase. Basically, a merchant offers a large discount (ex., $50 certificate for $25) via an entity that promotes the deal through email and social media, asking participants to share the deal with others and earning fees based on the sales they generate.

Groupon originated the concept, and now it seems the number of competitors is growing faster than the number of offers available. Now offers are being segmented into specialty markets like small businesses, fashionistas, and  moms.

The trick is that the offer is urgent – limited number! limited time! – with purchasers whipped into a frenzy to buy and share deals with their friends while merchants are assured increased traffic to their business.

Daily Deals*, Living Social, Posh Birmingham, and Sharing Spree are just a few sources of these group deals. Radio and TV outlets are also gathering their advertisers for similar offers.

Here are some tips from deal-addicted moms to avoid being overwhelmed:

1. The best deals are obviously those for merchants you would use anyway. A friend purchased a load of gift certificates for a restaurant where her family dines weekly. This was a huge bonus for her, since she was already a regular customer and would easily use all her certificates.

2. Deals are a good way to try out new restaurants or entertainment venues at less risk. You’re getting a discount of almost half, so you might try a place you wouldn’t have known about otherwise. Be aware that there is some risk. We purchased a set of two certificates to a new restaurant and decided we would need to return to use the 2nd certificate right away because the restaurant was probably not going to be in business for long. Hence, choose the least commitment you can for anything new and untested.

3. Have an plan for when you will use the deal before you purchase it.  Unless you have a definite time in mind for an ice skating session and complimentary hot chocolate, it will be 90 degrees outside and you’ll still have the unused deal hanging on your fridge (speaking from experience…).

4. If you’re buying lots of deals, keep a list for easy reference and set a limit. To her credit, my treating friend is using her deals as an excuse to catch up one-by-one with her friends and try some great restaurants. Plus, although she will protest, now I owe her! I will be on the hunt for a great deal to return the favor.