The Alabama Department of Archives and History, next to the Capitol, is built of beautiful marble that has held up well but unfortunately amplifies and ricochets the sounds 100 kids produce as they pour through its doors. When your child goes on the elementary school field trip, he or she will probably be sent on a scavenger hunt to find the state Bible, but there are more entertaining artifacts to be found. 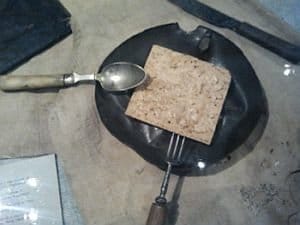 Hardtack with an amazing shelf life

For example, hardtack was a flour wafer rationed to Confederate soldiers during the war. This, my friends, is a display of ACTUAL HARDTACK issued in 1865 from Huntsville. It gives those wax dessert trays at restaurants a whole new respectability, no?

This is literally a 150 year old snack. How well we know about things getting lost in backpacks, namely homework assignments and teacher notes. Just imagine the cookie crumbs fossilizing in your kid’s old school backpack right now. Upon viewing this display, I was seized with a desire to return home and defrost the deep freezer. Seriously, wouldn’t you have thrown this away if you’d discovered it anytime after the war?

Then there is the chamber pot with the likeness of an unpopular war figure and politician on the bottom, arguably a precursor to today’s tune-playing training potties. 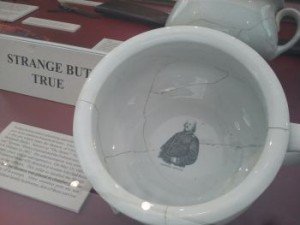 Before there were tune playing potties…

I read up on this fellow, Union General Benjamin Butler, and learned that he was despised during his 1862 occupation of New Orleans. The women treated Union soldiers there with such contempt that he issued the order known as the Woman’s Law: ” …any woman who hereafter shall, by word, gesture, or movement, insult an officer of the United States, shall be regarded and held liable to be treated as a woman of the town plying her avocation” (i.e., prostitute).

Of course, this was taken as a great affront, and instantly created the market for this Butler- inspired chamber pot.  This was before the days of officially licensed merchadise, so he presumably missed out on an income opportunity. Apparently he made up for this, as legend has it that  he” plundered the silver  (the nerve!) in southern homes.

An easy day trip, you would be well advised to take the kids to Montgomery during the summer when you can all avoid the school crowd hustle. You’d be surprised at what you can find there when you can take your time.

What's New
| Tags: day trips, Montgomery, summer, what do do with the kids this summer