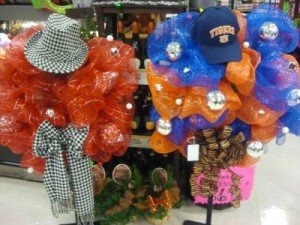 Most of us are probably embarrassed by Harvey Updike, our state’s current redneck from central casting who is famously accused of poisoning the oak trees at Auburn’s Toomer’s corner. Although he says he didn’t actually poison the trees, rather he only claimed to have poisoned the trees as a prank, Harvey has demonstrated questionable judgment either way. 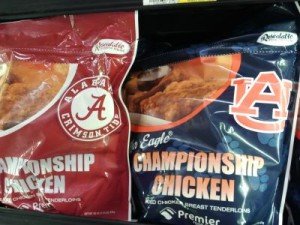 Can even a true fan taste the difference? 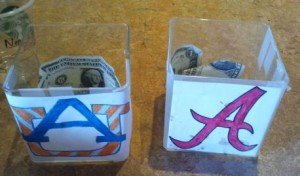 Sometimes I wonder if most of us don’t have a touch of Harvey in us. How else could we be persuaded to choose between identical chicken fingers based on the team-colored bags? Why else could we be manipulated into leaving more in the tip jar as a “vote” for our team (as if this matters to anyone at all other than the baristas – who, by the way, confirm that this contest is indeed profitable)?

And why else would any of us consider putting up a wreath with a hat on it?