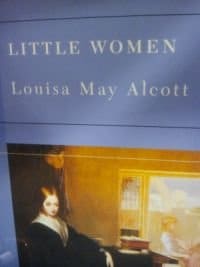 I’ve read lots of suggestions about how to live frugally, enjoy your family, and develop character during the Great Recession, but never have I heard of a more imaginative strategy than that of  my friend, a mom of tweens. When the last grocery item rolled across the belt and the store clerk told her unceremoniously that her card had been declined, she was inspired to ask, WWJD? What Would Jo Do?, as in Jo March, the eldest of the March sisters in Louisa May Alcott’s Little Women.

As her daughter hung her head in shame and the lady behind her sighed and shifted from one foot to the other, my friend channeled the cheerful, practical Jo, deciding Jo would just tell her to make a game of it as she determined which items to return. Wasn’t that exactly what the March girls were all about, finding ways to deal with adversity and improve their character in a Pilgrim’s Progress-style journey?

This wasn’t the first time my friend has found this method-acting-of-a-fictional character helpful as a coping strategy*. She says when she was reading Little Women as a young girl, she had always imagined that she was the unheralded fifth March daughter. Just imagine it: Jo, Meg, Beth, Amy. And Karen.

I enthusiastically reminded her that this was entirely possible. She could be the March daughter that hadn’t signed the release for the first series! After all, two more Kardashian/Jenner sisters just came out of the shadows to claim their share of the family’s reality TV fame. Let’s all just insert ourselves into the Little Women family narrative, which ends with mother March telling us she could never wish us a greater happiness than we already have.

Great literature yet again informs our modern lives, seasoned with a sprinkling of reality TV.

*Jo is a much more practical heroine than my alpine Heidi, who has only inspired me to devour lots of cheese and crusty bread in my lifetime. As a girl I’d even imagined one day naming a daughter Heidi, but then I married a Holt and “Heidi Holt” sounded a little too reminiscent of the Seven Dwarfs heading off to work…