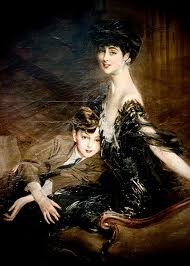 If you swoon over the eye candy of the Grantham Estate with it’s polished tea service and creaseless newspaper,  your answer to between-season withdrawal is the story of a genuine American heiress-turned-Duchess, Consuelo Vanderbilt Balsam, cousin to the founder of Biltmore Estate.

Consuelo, in her own words, shares an intimate (for a society lady, anyway) account of aristocracy and royalty in her memoir, The Glitter and the Gold. I discovered her book years ago at the Biltmore Winery’s shop. Any fan of Downton Abbey will be fascinated by her gilded cage/gilded age life, chronicled in even more detail in the biography, Consuelo Vanderbilt.

You know Consuelo slightly already because her portraits are some of the most familiar in the Metropolitan Museum and the National Portrait Gallery. She was famous for her long neck and incomparable strand of pearls (19 rows),  After all, she was filthy rich AND became a Duchess of one of the most magnificent estates in England at the age of 18. (Fun fact: Winston Churchill was next in line to inherit the dukedom had she not had a son.)

Married off to the Duke of Marlborough by her ambitious mother, the fabulously wealthy Consuelo had the original celebrity wedding in New York City. Thousands lined the streets to watch her carriage pass. Her autobiography gives us a startling glimpse of what it was like to be belle of the ball in the Gay 90’s.

Consuelo was front page material waaay before People Magazine. “I read to my stupefaction that my garters had gold clasps studded with diamonds, and wondered how I should live down such vulgarities.” Get other tidbits like this straight from the duchess’ mouth.

*Sir J.M. Barry, author of Peter Pan, told a friend, “I would stand all day in the street to see Consuelo Marlborough get into her carriage.” This surely says something of her comportment and fashion sense, coming from the man who created the likes of Wendy and Tinkerbell.

* As a young girl, she was literally strapped to a steel rod  from waist to forehead when doing her lessons so she would sit up straight like a lady.

* Although as a debutante she routinely received bouquets and marriage requests, there was only one proposal she wished to accept. She later learned that her mother had intercepted his letters and refused to receive him when he came to visit Consuelo during her summer in Paris.

* After marrying the Duke and arriving in England, Consuelo was put in her place by the stuffy Brits when some guests remarked that she was the first American her host had condescended to receive. (Paging Dowager Duchess Grantham).

* The servants were equally stuffy, especially when asked to perform a task considered beneath his/her dignity. Consuelo recalls asking a butler to set a match to an already prepared fire, “to which he gave a dignified bow and said, ‘I will send the footman, Your Grace’.” She told him to never mind, she would just light the fire herself. And we thought getting the kids to make their beds was a handle.

* Imagine the pressure on an aristocratic bride: “At the age of eighteen I was beginning to chafe at the impersonal role I had so far played in my own life – first a pawn in my mother’s game and now, as my my husband expressed it, ‘a link in the chain‘.” Infertility was a deal buster then.

* She reports spending hours placing guests according to the rules of precedent, not only in seating arrangements but also for the procession to dinner. With 25-30 guests each weekend, “It was also the lack of bathrooms which troubled my American sense of comfort and awakened stricken feelings towards my housemaids, whose business it was to prepare something like thirty baths a day.”

* Consuelo relates a horrible loneliness, kept from her children with only the “accredited hours an English nurse allows a mother the privilege of her children’s company.” Turns out there was a  downside to being a duchess.

There was much more to Consuelo than her wealth and manor living, as you will discover from reading The Glitter and the Gold. She summarizes that period of her life:

“Looking back on the last years of the Victorian era, I see a pageant of festive scenes. but pomp and ceremony were becoming tedious to one who, as my husband complained, had not a trace of snobbishness. The realities of life seemed far removed from the palatial splendor in which we moved and it and it was becoming excessively boring to walk on an endlessly spread red carpet.”