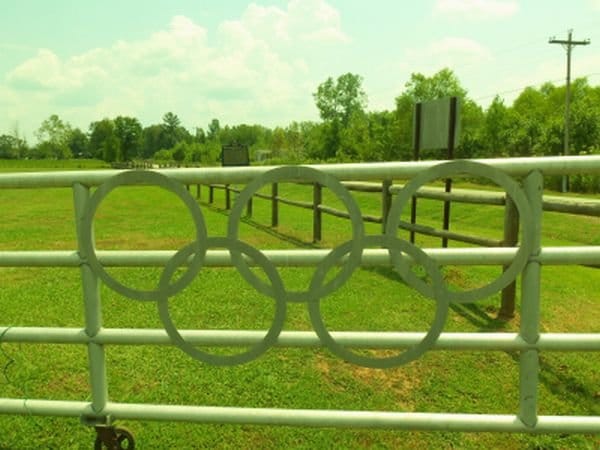 Do your kids roll their eyes at the prospect of visiting a museum, imagining stuffy silence as they shuffle past one musty old exhibit after another? Only a museum atmosphere could turn the exuberance of Olympic victories into a dull snooze, right?

What you may not know is that the Jesse Owens museum in Oakville, Al (near Moulton in northeast Alabama) is a fun stop for the entire family. It’s as much like a city park and rest area as it is a history lesson, and it’s well worth a detour on your next venture up I65, if not a day trip for its own sake. A roadside sign points you to the museum, but doesn’t tell you what a mom needs to know: 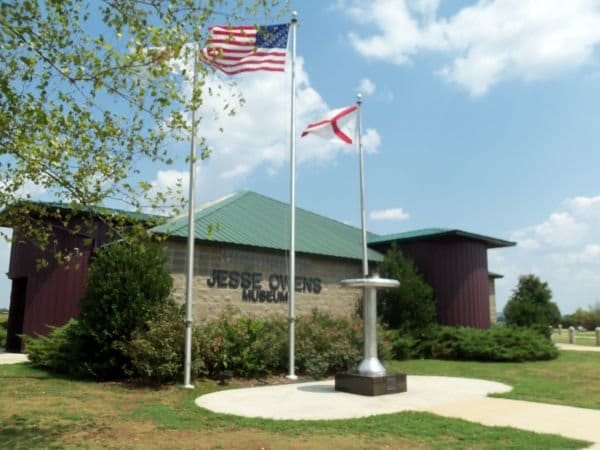 And that’s before we even get to the best part, the museum itself.

The museum is full of interesting exhibits but a manageable size that won’t tire everyone. Start with the short film, narrated by Owens himself, and feel the excitement in the stadium when he sets up to run. The crowd chants “Jes-se O-wens” and for all the color and pageantry of today’s games, it’s clear even in black and white that the games were also a magnificent spectacle in Berlin almost 80 years ago.

The Jesse Owens story has a genuine Bad Guy, and your kids probably won’t appreciate the appearance of Hitler watching the race from the dais or the significance of Owens’ victories in the face of rising hostilities based on race. That history lesson will come. For now, even a young child can grasp that winning a race is cool, and Owens did it several times in succession. 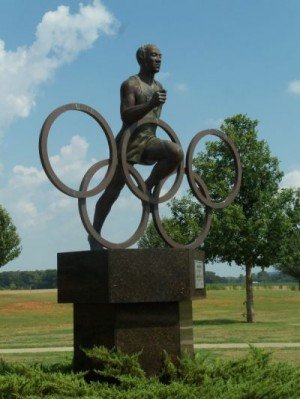 Sculpture by Branko Medenica of Birmingham

Maybe you have an ungrateful teen or two with you? Be sure to go through the model of Owens’ childhood home and let them see there was a time when kids didn’t have a bedroom, let alone stuff, to mess up. And mom, that wash tub on the wall is all Mrs. Owens would have had to launder the clothes for her family of 11. This Olympic mom had no prospect of a Tide commercial.

You can’t miss the magnificent sculpture of Owens by Birmingham sculptor Branko Medenica, who is, ironically, of German descent (check out Medenica’s other work on his site, brankoart.com).

In short, the Jesse Owens museum is a great visit for the entire family, displaying an irresistible true story of talent, sportsmanship, and drama. It’s not flashy, but it’s just what it should be: Informative, respectful, inspiring. Nothing less could get a mom like me to drop her purse and take off for the long jump pit.

Why not try it? Nobody is uploading to Facebook, are they?

Note: Our guide shared that sculptor Medenica’s mom visited the museum earlier this year and, although she is in her 80′s, even she gave it a run down the long jump. This is further proof that something just gets into us in the middle of the field where Owens himself used to run as a young child.