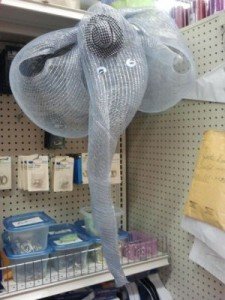 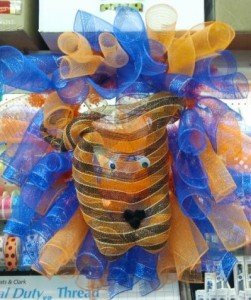 Tell me these won’t stop passing traffic at your front door or tailgate tent: Elephant or Tiger wreaths to show your allegiance – or insanity – for your team.

These cute door adornments are right on time for football season and fans who are enjoying being #1 as well as those who are needing encAUragement (I made that up just now, send the royalties this way). These characters are so full of personality, could they really have been conjured from fabric notions? 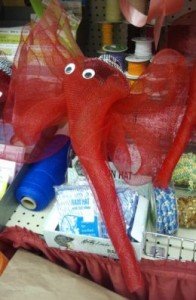 The clever toymaker behind these is Mary Anne of Smith’s Variety in Mountain Brook Village. Yes, this is the same Mary Anne that makes so many of the mailbox ribbons for new babies in town.* The large version of the Tiger Wreath (shown) or Elephant (the gray version shown) is $69.99. She also has a small Elephant (red pictured here) for $19.99, and all are available at Smith’s with a few days’ notice.

The photos don’t do these mascots justice. Imagine either version of the elephant on a shiny black door with that jaunty houndstooth hat and the trunk as pretty as a holiday ribbon. The gray version would be precious on a red front door, and two smaller elephants would be work for double doors.

Mary Anne’s tiger would pop against any background, but especially a wooden door or a central entryway. This tiger would be a scene stealer at your tailgating tent or RV, bright in the sunlight and welcoming friends. 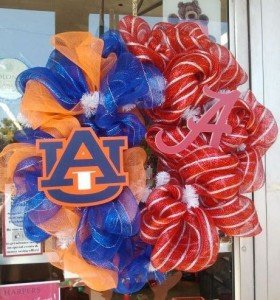 For homes that entertain young children (and that includes grandparents), these are a festive and not-so-subtle way to influence those impressionable young minds early. Don’t pretend you aren’t trying! And to those who compromise, check out the house divided wreath. I commend those who are civilized enough to share a wreath. In my mixed household, we can’t get there.

I have literally overheard a new dad say his wife told him”do not come home without the bow from Smith’s.” I wonder how the demands escalated during the course of that maternity leave…