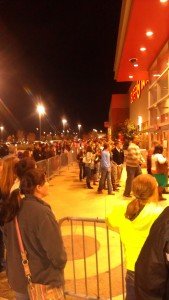 What possesses reasonable people to have a full day devoted to the concept of thankfulness and then spend that day strategizing about how to get more? Not only to get more stuff, mind you, but to leave warm beds and stand in long lines for it, swarming electronics counters like starving refugees waiting for a relief worker to toss a bag of rice. It’s disconcerting.

Thanksgiving used to be football rivalry weekend but now it is  survival of the fittest shopper, first come, first served, no rainchecks. A firsthand account of Target on Hwy 150 held that lines began forming at 5 p.m. for an 8 p.m. Thanksgiving Day opening. The first person to walk out with a big-screen TV received a round of applause and a few “You da man!” congratulations from the rest of the crowd. You’ll agree that this was a better reaction than firing shots or stampeding, as has happened with other frenzied crowds.

There’s something exhilarating about getting out with the masses, sale circulars in hand, to match wits with the best of the value seekers. It’s part social event, part team-building exercise. But do we really want to see otherwise civilized people in a melee over blu-ray players, especially when we could order one online and get free shipping?

Then there’s the moment when primitive instincts take over. This year my husband, who claims to be immune from the occasional shopping fever, brought home two fire pits even though we already have one. And on Wednesday, a lady in front of me at the check out in Walgreens confessed that she bought a Christmas tree on Black Friday three years ago and she has just now gotten a house big enough for it. So we are warehousing this stuff as well?

I’m conflicted. Maybe you are, too. I love a good deal, but there has to be a self-imposed limit on how much I will endure in the name of a bargain. Otherwise, the moment of thankfulness is swept away in a frenzy of getting more stuff.