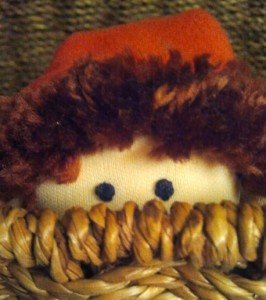 They’re baaaack… with their yarny little haridos and stuffed, unpose-able arms. Have you stared into those beady eyes and told your elf who’s boss? You need to set that elf straight right away.

Look here, elf, let’s be real. It was a blast the first couple of years you were here, when the kids were amazed by any little trick you did and we had tons of ideas on how to capture their imaginations. Our stunts are getting a little stale now, partly because we’ve used our best material and partly because the kids are no longer impressed with your ability to hang upside down from chandeliers or unroll toilet paper.

We’ve got to be more selective this year. We’re going for an intermittent schedule, meaning we do something whenever we take a notion instead of every single night. There is a long time between Thanksgiving and Christmas, and 20+ productions of elf magic are a lot to ask. Besides, I almost never got the flour dust, I mean snow, out of the kitchen tile grout the last year.

You were brilliant to bring the kids pajamas early in the season, but you seem to have set an expectation that there would be more gifts coming, and that could steal some thunder from your boss, Santa. We make a big deal out of Santa this month, placing a moratorium on almost all purchases  and putting off special requests until we see what Santa brings.  This delayed gratification is what gives meaning to the phrase “slow as Christmas” (and incidentally, “layaway.”) So let’s make the most of the mounting suspense,  shall we? It gives Christmas morning so much more impact.

Don’t take this personally, but I could have been content to countdown to Christmas with an Advent calendar. Your adoption was a bigger commitment that I realized at the time. Now we have to keep you guys out of (or rather, into) mischief for the whole season each year. This is ironic given my desire to simplify and pare down all the holiday obligations.

Before the elf invasion, we moms had enough to worry about with coordinating  kids’ holiday outfits, posing for the family photo, publishing and mailing Christmas cards, and getting cookies to the classroom party. Apparently someone who didn’t truly outgrow her Barbie dolls decided it would be fun to invite you elves into our homes and pull little pranks. I mean, it was bad enough that your labor was being exploited at the North Pole and now we have you working out of town on the midnight shift? Think about it.

Santa doesn’t hire you out for cheap, either.  You require a lot of care and feeding. Every time the kids pull out saltines to feed you, that’s a cracker sleeve left open and stale the next day. This is chili season, you know.

Aw, don’t cry. I’m sorry, I was too harsh. It’s holiday stress that does this to me every year.You’re right, we’ve made some great memories, right up there with when Santa put his foot through the ceiling while he was prowling around the attic. Why, you keep me on my toes! What else would I be doing if I weren’t working with you? Probably just sleeping a little more, and who needs it? Let’s put our heads together and come with the most epic trick yet. Word is that Santa’s bringing a new vacuum to clean up all that flour dust. We’ll just have to see.