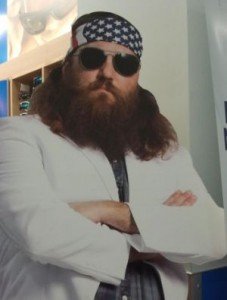 Forget duck calls, the Dynasty is going mass market with sunglasses at WalMart

Do you ever watch Duck Dynasty and wonder how you missed the reality show boat? Don’t you also have plenty of relatives you could exploit for entertainment?

Besides entertainment value, Duck Dynasty has made me mindful of appreciating and even embracing the family freaks. The best way to cope with an otherwise dreaded family gathering is to have an your own imaginary casting call. Consider what a production crew could capture if they simply observed the eccentricities that you take for granted.

Do a casual lunch table poll of your friends and see if they don’t all have a few family members with stories to inspire a cameo appearance:

The fellow known as Junior, who everyone assumes is named after his father with “Jr.” as a suffix. Turns out no, his given name really IS Junior. His parents named him Earnest Junior Jones and called him Junior. (You know how Oprah was supposed to be named Orpha but they transposed the letters on her birth certificate? She was born in Mississippi. We Southerners know how to muddle a birth certificate better than anybody.)

OC – This great uncle wasn’t even given a full name. No, OC isn’t short for something, like Oscar Charles or even Orange County. His given name is literally O C. No periods.

And how about the requisite maiden aunt, a.k.a. Old Maid? Either she had many suitors she rejected or she never got a chance at her own life because she was constantly care taking for the rest of the family. Your story is perfect if she was known simply as “sister.”

The common law relatives. Surely there is one set of these in your extended family. It’s the older couple who has been together for years but is unmarried, not in a Hollywood Goldie Hawn/Kurt Russell sort of way but rather in a the Pension-Benefits-Are-Better-Like-This way. Do you ever pause to wonder how the rest of the family tolerates this relationship when some of these same people were all in your business and pressuring you to set a wedding date?

Did you ever hear of “holy roller” family friends with the son who couldn’t get the spirit so they spent a day throwing water on him to get it to “take”? This was before there was ever any talk of such a thing as waterboarding.

So maybe we missed the casting call when producers needed characters for zany but sincere southerners who could generate entertaining scenarios just by being themselves. But it’s not too late to appreciate our own dynasties. If it looks like a duck, it has quacks like one too.