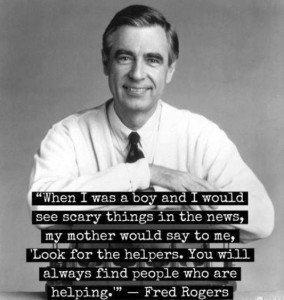 Following the Sandy Hook shooting and most recently following the bombing at the Boston Marathon, this photo and quote by Fred Rogers circulated widely on social media outlets.  It is the most popular item we have ever shared on our Facebook page and it seemed to be everywhere .

The quote reads as follows:  “When I was a boy and would see scary things in the news, my mother would say to me, ‘Look for the Helpers’.  You will always find people who are helping.”

But, I wonder if we are really helping.  Would Fred Rogers see us as ‘the helpers’ to whom he refers? Did every click, like or share of this photo represent a ‘helper’?  I hope so.

Telling children to look for a helper in a time of crisis is comforting advice.  However, a crisis to a child could be many things.  Certainly, a crisis situation looks like Sandy Hook or Boston but a crisis in a child’s world can also take the form of  a his/her parents’ divorce, a bullying situation at school, a young teen being verbally or sexually assaulted, falling behind in elementary school without recognition of a learning disability, even not being invited to the prom or the big party.  In these moments, when the crisis may not be apparent (or seem silly) to an adult, would that child see us as ‘helpers’?

Moreover, if we were to support children through these smaller crises could we help to avoid a larger crisis down the road.  Was there a point along the way when someone other than Adam Lanza’s mom had an opportunity to help?   In recent the Steve Jobs’ biography, he is quoted saying that but for his 3rd grade teacher he might have ended up in jail rather than the CEO of Apple.  3rd Grade.  We wondered then if Steve Jobs would make it in our world today.

In our own lives as moms, are we encouraging our children to invite the ‘weird’ kid to play and ensuring that they are kind at school?  Do we reach out to that mom in the carpool line and let her know about the summer camp or event that “all” the kids are attending?   Deep down, I suspect that could really help.

Today on the one-week anniversary of the Boston Bombing, let’s commit ourselves to being THE HELPERS in the big and small moments. In those small, selfless acts of kindness, I think we can make this world are safer place.