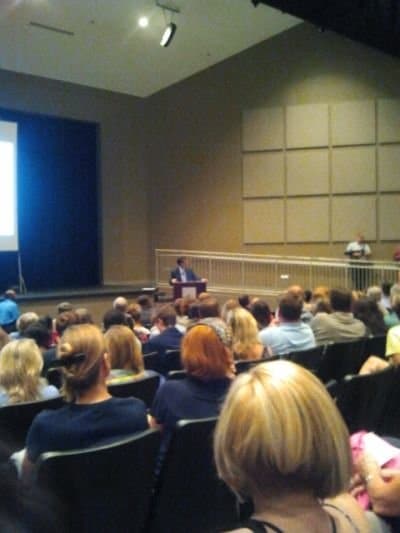 I have found that newcomers to Birmingham are often surprised to find that several of our best school systems do not provide bus transportation. One exception has been Hoover, Birmingham’s largest suburb (by geographic size and population) and home to two of the state’s largest high schools, Hoover and Spain Park.

Unlike Vestavia or Mountain Brook, Hoover isn’t a third generation kind of place (it was only incorporated in the ’60′s). Its rapid growth over the past 20 years includes commercial and residential development, with a population including corporate transfers and many families with both parents working.

Residents are concerned and upset with the Hoover School Board’s recent decision to end bus service beginning with the 2014 school year. At a community meeting on August 8th (which I attended), residents expressed their disappointment and even anger at being, as one dad put it, “abandoned.” He and his wife work downtown and chose Hoover in part because of the school transportation provided.

When the announcement was first made, I immediately thought of working parents and single parents who do not have a resource such as a family member or neighbor who can wait in a carpool line for 45 minutes or more at 7:30 a.m. or 3 p.m. While professional positions and more desirable employers may offer greater flexibility for working parents, it is the non-exempt, less skilled jobs that necessarily have strict  punctuality and attendance requirements, and employers in fact have policies to discourage and discipline any deviation from the schedule (after all, don’t you expect your customer service call answered regardless of whether someone had to get a kid to school?). These parents are already at an economic disadvantage, and I often wonder how they manage all the typical parental crises along with limited, if any, schedule flexibility. Of course, they were priced out of many neighboring school systems even before considering transportation.

When I drive down Hwy 31 in Vestavia and pass the 3 p.m. carpool line, I think about the tremendous resources behind all the idling SUVs:

Hoover annexed broad swaths of land from Greystone to Ross Bridge, and that is a LARGE area (Forty-four square miles, as opposed to Vestavia’s 14 square miles with a single high school). Both Hoover and Spain Park high schools are surrounded by roads with acknowledged traffic congestion and delays. Even if you don’t have child in the Hoover system, you may be commuting through a stretch of roadway – I65, 459, Hwy 31, Hwy 150, Hwy 280, Valleydale, and the list goes on – that is bound to be affected by an increased number of cars and inexperienced drivers. This is all before any consideration of impact to emergency response times or school parking space, which is already at a premium.

I appreciate the difficult position of Superintendent Andy Craig, who had to face the irate parents and explain the Hoover system’s efforts to do more with less over the past four years of declining revenue (I’ll link to the presentation once it’s available on the system’s website). And while I think it’s great that the school system is placing iPads and Chromebooks in the hands of most students, I would guess that parents could more easily afford a one-time investment in an iPad or laptop for their child than they could deal with securing transportation to and from school for each child every day. As one student’s sign said, “What good is my iPad if I can’t get to school?”

I know that Hoover, a large community dotted with small businesses, large corporations and some of the state’s flagship shopping destinations, can come together in everyone’s best interest to develop some innovative options that get students to their instructional venues. Placing the responsibility for transportation on each parent (who had every reason to expect a bus program when choosing a home in Hoover) is ultimately going to be painful and inefficient for everyone.

I am realizing that it’s not only a revenue issue, but also the state’s system of reimbursement, the prohibition against charging an additional fee for bus service, and the city council’s allocations that contribute to the problem. There isn’t one single root cause, there are several. You might call it a cluster.