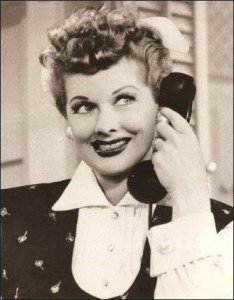 What if Lucy had had a smart phone? Photo from IMDB.

As a kid watching after school reruns of I Love Lucy, it was always a mystery to me why Lucy Ricardo was so desperate to perform for a crowd despite apparently having no singing or dancing ability. Lucy’s antics in her quest to be in the spotlight or meet celebrities were enough to fuel episodes for six years of the original TV show, but her desire for attention is even more relevant 60 years later.

Nowadays Lucy would have herself a smartphone with You Tube, Instagram and Vine accounts and Ricky could just go bang his conga drum. Like everyone else, she could be friended, followed, and even famous without her husband’s blessing or nightclub connections. Had she wished, she could have also pioneered the celebrity endorsement and branded/sold more bottles of Vitameatavegamin than George Foreman his grills or Dr. Dre his Beats – combined.

Could it be that the quest for attention is an innate human desire that Lucy just happened upon during the nascent moment of television? Is it inevitable that the variety of new media would create a generation of Lucy Ricardos? Because how else did we get here, where our kids are measuring their popularity by the number of likes they got on their last selfie photo?

If kids are using Instagram and Facebook as a sort of scrapbook to hold memories, maybe it makes sense, and is certainly better than the dried corsage that will eventually have to be discarded (side note: corsage? how quaint). But if the point is to capture even the slightest acquaintance as a friend or follower, something is missing. Will they ever know the intimacy of sharing secrets with a best friend like Ethel, or must they instead broadcast every observation into space and hope for a comment?

Beyond monitoring the kids’ Lucy-like desire for attention is the serious responsibility parents now have to keep an eye on all the content  their kids are publishing. It seems that it is no longer a Faustian bargain to give up privacy for 15 minutes of fame. Sigh. I miss Lucy. Her desire for a spot in the nightclub act seems harmless in comparison to a sext that could live on forever.

On the one hand, it’s wonderful to see the democratization of all these channels for connection and attention. On the other, as a mom, monitoring all this activity is as exhausting as…well, working in a chocolate factory.