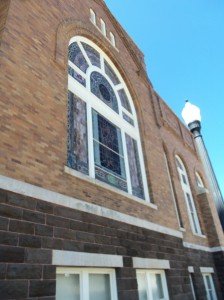 If you’re a Birminghamian but have never visited the 16th Street Baptist Church, this is your year to make amends and see the very place that brought the eyes of the world to Birmingham and galvanized the Civil Rights Movement.

This is the church where a bomb exploded one Sunday morning to kill four little girls and wound others in a crime that went unpunished for decades and demonstrated just how low some people will go out of pure meanness.

What may surprise you in visiting 16th Street Baptist Church is that this isn’t a museum with velvet ropes and mood lighting to show off some well-curated display. Neither is it a reverentially silent sanctuary with a brooding sense of eternal mournfulness. It is an active church, still connected to the community and engaged in its mission of service to its members.

In fact, when I visited there was a Bible study going on in the basement just a few feet away from where the bomb exploded (what was I expecting? That fear and dread would have prevented the basement ever being used again?).  A few members were in the fellowship hall clearing away the remains of the lunch they had brought in.

Some ladies graciously offered to walk us around and point out the most significant features, such as the classroom where the girls were at the time, or the wall of historically significant photos and letters from leaders offering condolences and encouragement. It felt as if we had been welcomed into someone’s home and they were casually sharing their family portraits. One of our guides had grown up attending the church and recalled the how, following the bombing, she remembers the adults being guarded but determined to carry on. (It occurred to me that I was getting this account first hand, not from a news anchor or an interview edited down to sixty seconds. Had someone captured her story? I hoped so.) 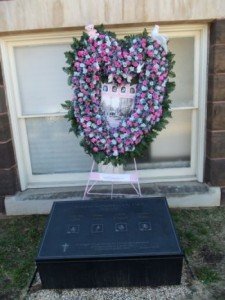 Marker in front of basement window

Outside was a permanent memorial to the girls (see photo), along with a wreath. As I looked up  the steps and the distinctive dome, then the iconic sign that has been seen the world over, I thought how odd it was that a place of such significance was a functioning church like so many others all over country, with little letters stuck into a felt board declaring an upcoming sermon series, printed programs, red velvet pew cushions. A service scheduled for this Sunday and every Sunday after that.

The realization hit me that this seemed exactly the right thing. Fifty years later, we don’t have a stuffy landmark preserved at arm’s length. We have a building that is lovingly tended by its members, many of them impressionable children 50 years ago. They are still vital after 50 years, still welcoming guests and demonstrating the determination that was no doubt instilled by their parents who faced terrorism, intimidation and fear and were finally rewarded with change.

You can visit 16th Street Baptist Church as part of a tour of the Civil Rights Institute or on your own. Your children are welcome and encouraged to visit and see the place memorializing young girls and the difference they made in the nation’s collective conscience.